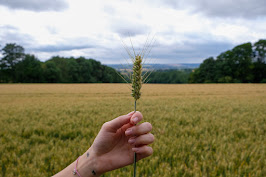 Barley is stated by historians to be the oldest of all cultivated grains. It seems to have been the principal bread plant among the ancient Hebrews, Greeks, and Romans. The Jews especially held the grain in high esteem, and sacred history usually uses it interchangeably with wheat, when speaking of the fruits of our earth.
Among the early Greeks and Romans, barley was almost the only food of the common people and also the soldiers. The flour was made into gruel, after the following recipe: "Dry, near the fire or in the oven, twenty pounds of barley flour, then parch it. Add three pounds of linseed meal, half a pound of coriander seeds, two ounces of salt, and also the water necessary." If an especially delectable dish was desired, a little millet was also added to give the paste more "cohesion and delicacy." Barley was also used whole as a food, within which case it had been first parched, which continues to be the manner of preparing it in some parts of Palestine and many districts of India, also within the Canary Islands , where it's called and known as gofio.
In the time of Charles I, barley meal took the place of wheat almost entirely as the food of the common people in England. In some parts of Europe, India, and other Eastern countries, it's still largely consumed as the ordinary farinaceous food of the peasantry and soldiers. The early settlers of new England also largely used it for bread making.
Barley is less nutritious than wheat, and to most people is less agreeable in flavor. It is likewise somewhat inferior in point of digestibility. Its starch cells being less soluble, it offers more resistance to the gastric juice.
There are several distinct species of barley, but most commonly cultivated is designated as two-rowed, or two-eared barley. In general structure, the barley grain resembles wheat and oats.
Simply deprived of its outer husk, the grain is termed Scotch milled or pot barley. Subjected still further to the process by which the fibrous outer coat of the grain is removed, it constitutes what's referred to as pearl barley. Pearl barley ground into flour is known as patent barley. Barley flour, since it contains so small a proportion of gluten, needs to be mixed with wheat flour for bread-making purposes. When added in small quantity to whole-wheat bread, and has a tendency to keep the loaf moist and is believed by some to improve the flavor.
The most general use made of this cereal as a food is within the form of pearl, or Scotch, barley. When well boiled, barley requires about two hours for digestion.

Popular posts from this blog

WHAT MAKES AN IDEAL KITCHEN

February 08, 2021
It is a mistake to suppose that any room, however small and unpleasantly situated, is "good enough" for a kitchen. This is the room where housekeepers pass a great portion of their time, and it should be one of the brightest and most convenient rooms in the house; for upon the results of no other department depend so greatly the health and comfort of the family as upon those involved in this 'household workshop'.  Every kitchen should have windows on two sides of the room, and the sun should have free entrance through them; the windows should open from the top to allow a complete change of air, for light and fresh air are among the chief essentials to success in all departments of the household. Good drainage should also be provided, and the ventilation of the kitchen ought to be even more carefully attended to than that of a sleeping room. The ventilation of the kitchen should be so ample as to thoroughly remove all gases and odors, which, together with steam from
Post a Comment
Read more

January 20, 2021
Boiled salmon. --------------  Ingredients:- 6 oz. of salt to each gallon of water, sufficient water to cover the fish.  Mode:- Scale and clean the fish, and be particular that no blood is left inside; lay it in the fish-kettle with sufficient cold water to cover it, adding salt in the above proportion. Bring it quickly to a boil, take off all the scum, and let it simmer gently till the fish is done, which will be when the meat separates easily from the bone. Experience alone can teach the cook to fix the time for boiling fish; but it is especially to be remembered, that it should never be underdressed, as then nothing is more unwholesome. Neither let it remain in the kettle after it is sufficiently cooked, as that would render it insipid, watery, and colorless. Drain it, and if not wanted for a few minutes, keep it warm by means of warm cloths laid over it. Serve on a hot napkin, garnish with cut lemon and parsley, and send lobster or shrimp sauce, and plain melted butter
Post a Comment
Read more

January 25, 2021
Home-made macaroni. ------------------  To four cupfuls of flour, add one egg well beaten, and enough water to make a dough that can be rolled. Roll thin on a breadboard and cut into strips. Dry in the sun. The best arrangement for this purpose is a wooden frame to which a square of cheese-cloth has been tightly tacked, upon which the macaroni may be laid in such a way as not to touch, and afterwards covered with a cheese-cloth to keep off the dust during the drying.  Boiled macaroni. ---------------  Put a large cup of macaroni into boiling water and cook until tender. When done, drain thoroughly, then add a pint of milk, part cream if it can be afforded, a little salt, and one well-beaten egg; stir over the fire until it thickens, and serve hot.  Macaroni with cream sauce. -------------------------  Cook the macaroni as directed in the proceeding, and serve with a cream sauce prepared by heating a scant pint of rich milk to boiling, in a double boiler. When boiling, add a heaping t
Post a Comment
Read more